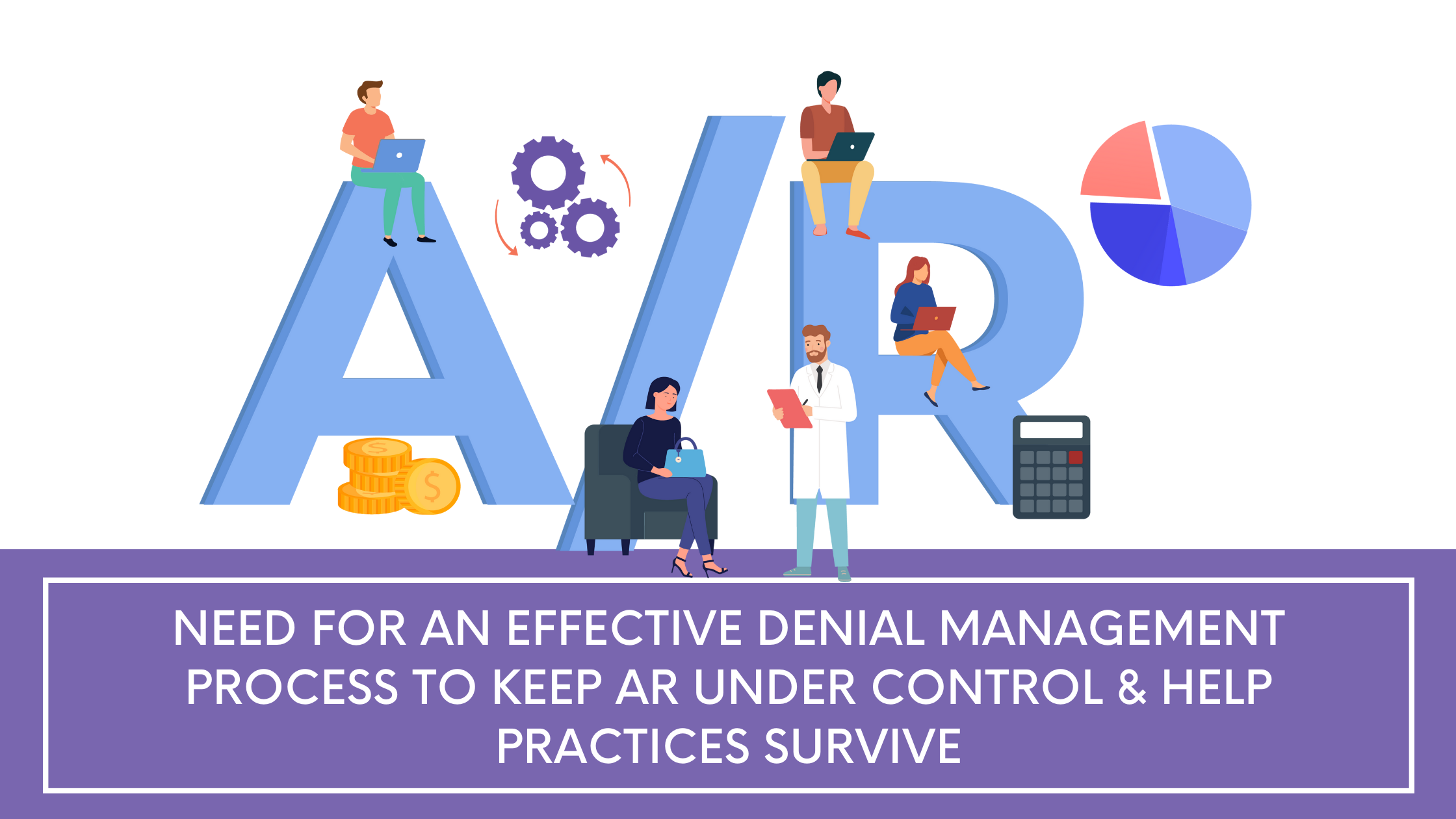 If a patient uses insurance to pay for any medical care, the responsibility of claiming insurance falls on the healthcare providers. While this system is fair in most cases, it is, without a doubt, a complex process. In order to receive reimbursements on time, the medical billing process should be error free. If the claims have preventable errors such as missed patient information or inaccurate data, then the insurance companies will deny them. Claims denial can delay reimbursement by several weeks.

Claims denial is a concerning issue for revenue in private practices and hospitals alike. Optimizing accounts receivable (AR) in medical practice demands rigorous attention to detail while making insurance claims. In order to improve revenue in healthcare, minimizing the number of insurance claim denials is a must.

What is Accounts Receivable (AR)?

Any overdue medical bill for medical services that have still to be reimbursed by the insurance provider or the patient is termed as account receivable (AR). Statistical evaluations of revenue cycles have shown that if an AR is overdue for long durations, the likelihood of reimbursement declines exponentially, and increases the rates of revenue leakage.

What Percentage of Claims Get Denied?

Claims denial percentage is an important determining factor for any medical practice’s income. Researchers who examined Centers for Medicare & Medicaid Services (CMS) data to evaluate medical insurance plans, found that the rate of denials had increased from 2018 to 2019 from 14 percent to 17 percent of all claims. 17 percent of claims denial may not sound like much, but it represents more than 40 million insurance claim cases.

Furthermore, the claim denials also ranged widely from one provider to another. Some insurance providers denied less than one percent of total claims while some had denied more than 50 percent of all claims. While there are mainly six major causes for an insurance provider to reject a claim, this categorization becomes unclear, when your claim falls under the category of ‘all other reasons’.

The most common reported reason for denial, according to insurance service providers, was because the treatment or care provided did not fall under insurance coverage. But this contradicts the findings of the researchers, who state that 72 percent of claim denials had other non-specific reasons.

Further long-term studies found that over 50 percent of denied claims were never reimbursed, which resulted in over $20 billion in losses per year in the US.

Estimating claims denials in private practice is difficult as this depends on how well each practice manages its revenue cycle. But, we can estimate how significantly claim denials can affect your practice. Reapplying for insurance claims requires not just time, but also money. For every resubmission of insurance claims, it can cost your practice upwards of $50. This number will rise significantly if your number of denied claims rises per month. If you get 50 rejected claims per month, just the process of reapplying your claims can cost your practice up to $30,000 annually.

Why Do Insurance Companies Deny Claims?

There can be several reasons why your claim was denied. Let’s take a look at each possible cause.

The most common reason for claim denials is missing or inaccurate information. If your team responsible for filling out the paperwork does a less than perfect job, your practice will suffer from revenue losses. Human errors are often unavoidable, but you can easily rectify them by using software that rechecks all input prior to finalization.

While this may seem like an unlikely error, practices with a large volume of patients and a correspondingly larger number of employees, often file duplicate claims. Lack of coordination between team members, or failing to mark off submitted claims are responsible for billing a claim twice.

Up-coding refers to the addition of codes to services that the patient did not receive, while under-coding is leaving out any codes from the claim. Often, this is an error on the part of an inexperienced team member, but sometimes intentional up-coding is also done to inflate the bill. Regardless of the cause, both under-coding and up-coding are considered illegal and can make you liable to criminal charges.

A common yet avoidable cause of claim denial is failure to apply for claims within the stipulated time frame. Reasons for this can be a shortage of employees or inefficient team members.

According to insurance service providers, the commonest cause of claim denials is lack of coverage. Patients may have changed their insurance plans to less costly options with inadequate coverage without letting their healthcare providers know. This can be avoided by verifying the eligibility of all claims prior to providing the service.

Medical insurance claim denials can be classified into three major categories based on the underlying cause of denial.

With an overwhelming number of claim denials, you may lose some claims as a result of an incompetent revenue cycle management (RCM) system. Such lost claims can be counted as losses, as you often miss the deadline for resubmission of claim denials. Hire a competent team like Practolytics that knows well how to coordinate with each other and use updated systems that recheck every single human error prior to claim submissions.

While it can be frustrating to deal with claim denials, you must work on each denial as soon as possible to avoid delays and losses to your income. Design a plan to deal with every claim with a list of strategies to handle every reason for claim denials. Ensure that your team is familiar with reasons for claim denials and how to tackle them efficiently.

Disputing and dealing with claim denials costs time and money. Prepare a strategy that distinguishes which denials need to be disputed and how you can dispute them in the most time-saving and cost-effective manner. Make sure your team knows what each denial code means, and how to appeal the denial. Design templates for appeals, as the content of claims appeals, is an important part of ensuring that your claim goes through.

Prevention is better than cure. This applies to claim denials as well. For every claim denial, you must analyze the reason in order to prevent similar errors in the future. Analyze points such as the root cause of denial, whether the error was preventable, how the denial could have been prevented, and how you can improve.

Reviewing In A Timely Manner

Insurance companies have a timeframe for the application of claims. If you fail to submit your claims within the timeline, the insurance providers are within their rights to reject or deny your claim. Once your claim is denied, any future attempts for resubmission as claims will be automatically denied as untimely submission. This easily avoidable error must not be overlooked in order to successfully prevent revenue leakage due to timely filing limits.

Documentation errors on part of physicians, whether it be inadequate documentation or poor quality of documentation, can hinder coders from capturing medical conditions in detail. This can give the insurance provider more than enough reason to reject claims on grounds of lack of medical necessity or unclear reasons for medical care. So, it is the duty of medical practitioners to have a standard of documentation following ICD-10-CM, to prevent claim denials.

ALSO READ – Impending ICD-11 Changes, What Your Practice Should be Prepared for?

Make sure that you have a record of each interaction you have with the insurance providers from the beginning of the claims process. This record should also entail information on the name of the person with whom you have corresponded, the date of communication, the reasons for claim denials, and your actions to deal with the denial. This is important if your claim has been denied again, and you may need to take further actions at a state level or pursue legal action.

An efficient denial management system is made of a competent team familiar with all claim denials reasons, reason codes, and an updated system with technology that is designed to deal with revenue cycle management.

It can be difficult and frustrating to deal with claim denials, but seeking help and guidance from professional RCM companies can be both time and cost-saving in the long run. We, at Practolytics, are experienced in dealing with claim denials and deal with your finances in a professional manner to ensure that your practice is profitable.  Talk to an expert at Practolytics and you will get an answer to every question.

ALSO READ – Effects of Patient AR Build Up on Your Practice: Best Practices to Set Your House In Order 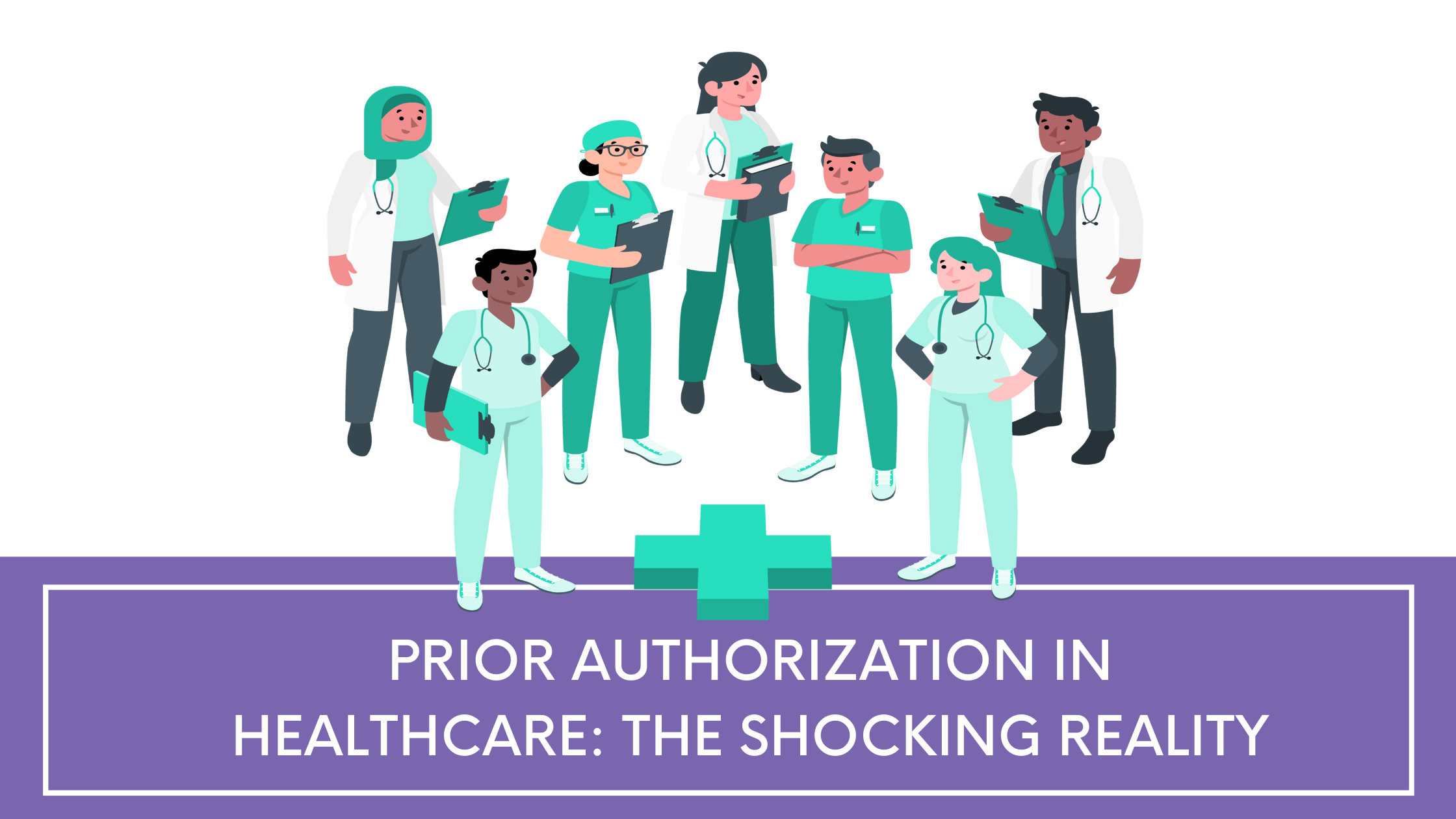 Prior Authorization in Healthcare: The Shocking Reality 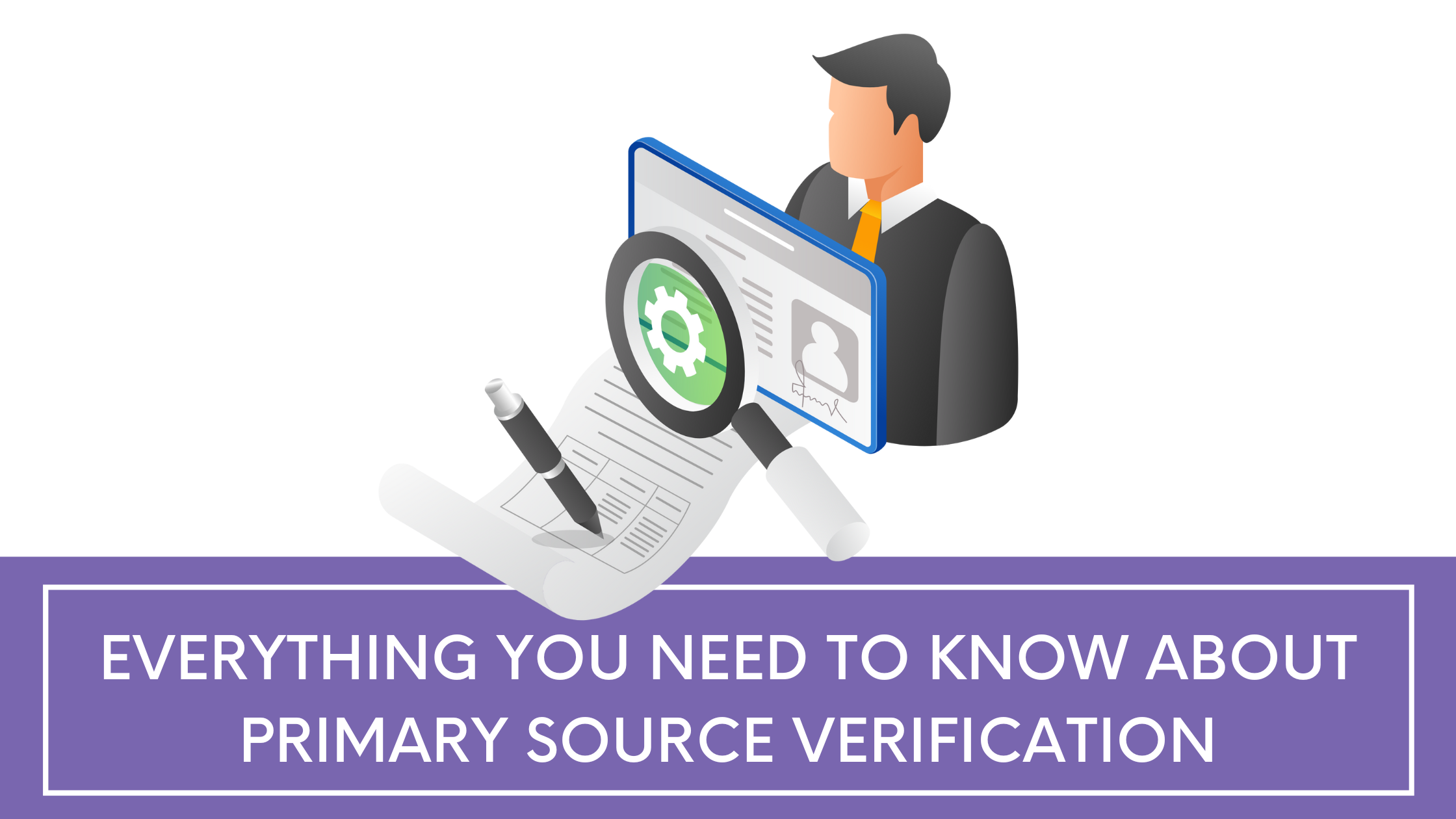 Everything You Need to Know About Primary Source Verification 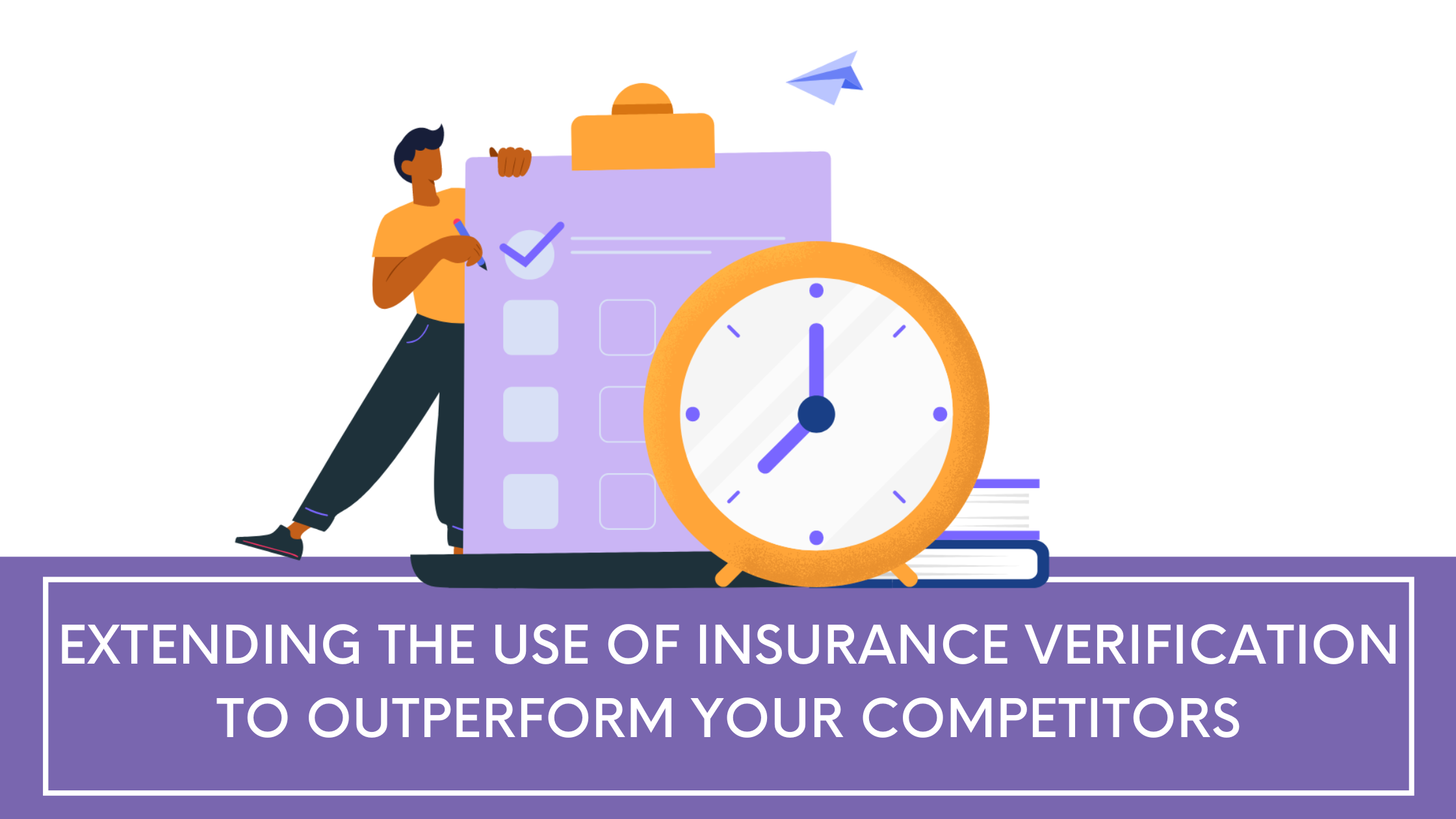 All Eligibility and Benefits Verifications

Extending the Use of Insurance Verification to Outperform Your Competitors